The field of medicine is ever-evolving and has numerous new drugs on the production line every few months. While these drugs are targeted at certain symptoms only, it is unlikely that they come with additional benefits. In a time such as this, returning to the roots of our ancient system seems like a viable and a conscious choice in the direction towards a healthy lifestyle. It isn’t often that one comes to the realization that over the counter or non-prescription drugs can easily be substituted with natural and healthy remedies. While we have that on our mind, let us take a look at some herbs and plants that help us fight the most common of all ailments: Fever.

Fevers are a sure sign that our body is fighting against foreign bodies, pathogens, illnesses or infections. Tulsi has immunomodulatory, antibiotic, antifungal, disinfecting and antimicrobial effects. All these properties, effectively battle against fever and infection-causing pathogens and keep one healthy. Read this study for a detailed read.

Suggested Remedy: A few Tulsi leaves can be picked, cleaned and boiled in water to make tea. They can be eaten on their own or with honey to boost immunity.

Side Effects: Tulsi must not be consumed in large amounts, especially in pregnant women as it can cause uterine contractions due to the presence of estragole. The exposure and consumption of Tulsi must be limited and closely monitored in children. Pregnant or breastfeeding women must not include it in their diets.

Tulsi is used in numerous Ayurvedic medicines such as the following:

An indispensable ingredient in most Asian households, garlic is a great flavour enhancer in all sorts of dishes. If we all remember clearly, the heads of our families always vouched for the benefits that came with eating garlic, raw or in our favourite curries.

A study conducted on the therapeutic and pharmacological properties of garlic and shallots has shown that garlic contains allicin and other sulphur compounds that are antibacterial, antifungal, antiviral and antiparasitic in nature. This property helps in eradicating fever causing microbes and lowers the body temperature. Garlic also promotes sweating and facilitates the flushing out of toxins from the body.

Suggested Remedy: It can be consumed in food, or mincing it and steeping it in warm water to alleviate fever. Garlic oil can also be massaged into the soles of the feet to treat symptoms of fever.

Side Effects: One downside to consuming garlic is bad breath. While that can be overlooked in favour of its numerous benefits, one must be careful not to consume it in excess. Excessive consumption can lead to a burning sensation in the mouth and stomach, heartburn, diarrhoea, gas and nausea.

Garlic is used in numerous Ayurvedic medicines such as the following:

Ginger is reminiscent of cold days and Adrak chai. Cooking ginger in water to make tea or drying it spikes the content of shogaol compounds. Gingerols and shogaol compounds have a variety of health benefits such as reducing inflammation and relieving pain and soreness. Ginger also has immunomodulatory, antiviral and antibacterial properties, thus targeting the very roots of fever symptoms.

Suggested Remedy: It can be grated into boiling water or consumed in powder form along with honey.

Side Effects: Ginger can cause irritation in the mouth and throat when orally administered. Excessive consumption can also lead to heartburn, diarrhoea and abdominal discomfort. It can also aggravate the pitta in some individuals.

Ginger is used in numerous Ayurvedic medicines such as the following:

Cinnamon is commonly used as a spice in Asia and the world over. Cinnamon is high in antioxidants to fight against free radicals and is also known to be antimicrobial and anti-inflammatory in nature. These characteristics of cinnamon make it effective against common strains of gram-positive and gram-negative bacteria, thus protecting the body from diseases and reducing the probability of the onset of fever.

Suggested Remedy: Cinnamon can be used in the form of tea and consumed along with a spoonful of honey in the early hours of the day.

Cinnamon is used in numerous Ayurvedic medicines such as the following:

Also referred to as Amrita, it literally translates to the nectar of the Gods. The Giloy plant is known to have antimicrobial properties and also boosts the phagocytic activity in our immune systems. It has been termed as a jwaraghna, a fever-reducing agent in the Charaka Samhita (click to read details about top books of Ayurveda). It also rejuvenates and detoxifies the body and is known to create a balance between all three doshas.

Suggested Remedy: It is generally used after deriving the juice or in the form of dry ground powder. 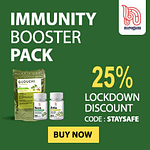 Side Effects: While it is generally safe to use and consume, it can cause low blood sugar levels in diabetics. In the case of long term use, blood sugar levels must be regularly monitored to ensure no drastic or negative readings are observed. Those with autoimmune disorders must avoid using Giloy as it may aggravate the symptoms. Excessive use may also lead to constipation.

Giloy is used in numerous Ayurvedic medicines such as the follows:

Neem has long been used for treating issues pertaining to the skin or in purifying rituals. It is an excellent remedy for treating fevers that are caused due to aggravated Kapha and Pitta. The bark of the neem tree is the primary ingredient for treatment. It has antimicrobial, antifungal and anti-inflammatory properties that are a great way to treat numerous issues associated with the skin, hair and overall wellbeing. It is especially useful in treating malaria induced fevers and boosts immunity.

Suggested Remedy: It can be consumed in the form of tea, which is a slightly acquired taste due to the bitterness.

Side Effects: It is not recommended to use neem oil or neem bark during pregnancy. Excessive use can also lead to diarrhoea, vomiting, drowsiness or in severe cases, seizures.

Neem is available in the form of capsules or in oil form. It is generally used in combination with Ayurvedic medicines such as Sitopaladi Churna to treat cough and cold.

Often used as a seasoning, the black pepper is extensively used in Asia. it has deep roots in Ayurveda and is a primary component of the trikatu, which is used to treat infections and digestive issues. It is effective in treating disorders associated with the Vata and Pitta doshas. It has the capacity to resist infections and offer relief from fever.

Suggested Remedy: It is mostly used in combination with cinnamon and ginger.

Side Effects: Black pepper is considered safe to use. Excessive use of black pepper may lead to irritation in the throat and stomach and excessive sweating.

Pepper is used in numerous Ayurvedic medicines such as the following:

Coriander is rich in antioxidants and boosts immunity. It has long been used in the form of coriander leaf tea or coriander seed decoctions to treat fevers and other digestive issues. These teas can be consumed in spoonfuls throughout the day to alleviate the symptoms of fever.

Side Effects: Coriander is considered safe to use. Excessive consumption, however, may lead to digestive disorders or stomach pain.

Coriander is used in cold infusions as well along with sugar to treat fever and its symptoms.

Cumin or jeera water is chock-full of benefits. It is high in antioxidants that aid in fighting fever symptoms and also boost immunity.

Suggested Remedy: Cumin seeds can be ground into a coarse powder and soaked in water overnight. This can be consumed while on an empty stomach to avail maximum benefits. Cumin tea can also be consumed to battle the common cold and the fever associated with it.

Side Effects: Excessive consumption of cumin can lead to diarrhoea, water retention and gas.

Cumin is used in numerous Ayurvedic medicines such as the following:

Grapes have cooling properties and high amounts of vitamin A and C which fight the side effects and symptoms of the common cold and fever. It also has malic acid which works against fatigue and promotes energy production.

Side Effects: Excessive consumption of grapes can lead to irritation in the throat and stomach upset. Grapes are also extremely cooling so they can be taken along with ingredients that have a hot potency.

Grape is used in numerous Ayurvedic medicines such as the following: 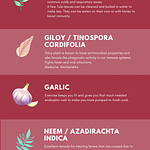