Tinospora cordifolia (Botanical name), most commonly known as Guduchi in Sanskrit, Giloy in Hindi and Heart Leaved Moonseed in English finds mention in the very famous Indian epic ‘The Ramayana.’ Impressed with Lord Rama’s victory over Ravana, Lord Indra sprinkled nectar from heaven to restore the lives of the dead monkey army. The drops that fell on earth took the form of the Giloy plant. Yet another lore of the Indian mythology makes a reference to Guduchi. During the great Samudra Manthan (Ocean churning) emerged a container of elixir, a few drops of which fell on the earth leading to the birth of the Guduchi plant.

Due to properties of providing an all-round benefit to the body, Giloy has been called an Amrit in various Ayurvedic texts like Tridoshshamaka,  Pandunashaka, Kricch-Hridroganashak etc.

Guduchi is a perennial herbaceous vine belonging to the family Menispermaceae. The climbing shrub is voluminous taking up large space and does not need focused cultivation. Twining around large trees, the herb is said to be most beneficial when it grows with the support of trees like neem as it inherits the properties of the tree around which it grows.

Apart from growing widely around India, the climber plant can be found in tropical areas of Sri Lanka, Bangladesh and Myanmar. One can easily identify Giloy through the large heart-shaped leaves.

Almost all parts of this magnificent herb from seed to stem have been found to be useful in curing various ailments. In a diverse country like India, different tribes and clans have emerged with their own traditions involving usage of Guduchi as a medicine.

Giloy plant which is categorized as an Amrit in Ayurveda is a storehouse of such constituents which are the primary reason behind its ability to provide miraculous benefits to the body – from general vitality and youthfulness to its anti-cancer and anti-inflammatory properties.

Guduchi has been documented as a herb that is:

The following table gives a brief idea about its chemical constituents:

Apart from this, the plant has also been found to be rich in potassium, calcium and protein.

The all-rounder herb has wide-ranging benefits, a detail of which has been provided in the below-mentioned points:

Giloy As An Immunity Booster

The vitality enhancing herb is well known for its ability to enhance immunity. Packed with antioxidants, Giloy flushes out free radicals. It also acts as an anti-toxin and a blood purifier by balancing the pitta dosha. It works as a health rejuvenator and creates an immune system that is capable to fight diseases like jaundice, tuberculosis and other chronic fevers. Consuming Giloy vati daily can free you from the numerous visits to the doctor by creating a healthier and stronger version of your body.

Suggested Remedy – For relieve from jaundice, prepare Giloy leaves powder by drying them. Consume it with a teaspoon of honey for best results.

Ayurveda calls Tinospora cordifolia as a Medha Rasayana as it helps in enhancing memory. Specifically, the extract of the root of the Giloy plant worked as a memory enhancer when given to rats in a controlled setup. Children responded with not only better IQ levels but also a decrease in mental instability.

Being an adaptogen, Giloy reduces mental stress and anxiety and boosts cognitive functions, which is why it is considered as an excellent brain tonic.

As mentioned previously, Giloy purifies the blood by acting as an anti-toxin. This internal cleansing of the body makes the skin look naturally fresh. Apart from this, Giloy due to its anti-ageing properties clears wrinkles and dark spots and can give you younger-looking and flawless skin.

Not only this, but Giloy also helps in fighting skin problems like eczema and acne breakout too.

Suggested Remedy – For healthier and glowing skin, apply a mix of Guduchi powder, rose water and honey on your face daily.

A hypoglycaemic agent, Giloy is quite beneficial for all those who suffer from diabetes by reducing blood sugar levels and also controlling the lipid levels. It makes the treatment of type 2 diabetes much easier.

Suggested Remedy –Half teaspoon Guduchi powder twice a day can be helpful in not only controlling blood sugar levels but also diabetes-related problems like kidney damage.

Giloy has been traditionally used to cure respiratory disorders as it helps in placating the mucous membrane of the respiratory system. This is why it was occasionally used to treat chronic disorders like bronchitis. The juice of the stem if consumed orally with honey can help in fighting the life-threatening Asthma.

Giloy, when combined with ginger, was found effective in treating rheumatoid arthritis. The anti-inflammatory and anti-arthritic properties help in easing joint pain.

Suffering from constipation and indigestion? Giloy is here again to the rescue. It helps not only in building a stronger digestive system but also fighting worm infestations, acidity, appetite loss etc.

Suggested Remedy – Consuming a mix of amla powder and Giloy powder works as a wonder in treating occasional indigestion. Giloy, when consumed with buttermilk, can be beneficial for patients suffering from piles.

Giloy For A Better Vision

Giloy can help you say goodbye to your spectacles and even treat various eye disorders. Applying the concoction of Guduchi powder boiled in water on the eyelids on a daily basis does the job.

Giloy In Treatment Of Dengue

Dengue, a dreadful mosquito-borne viral disease is the cause of death of many people each year. Giloy proves to be beneficial as it significantly improves the blood platelet count. Its antipyretic properties help in cooling the body and reducing fever. It not only revives the patient but rejuvenates by preparing the immune system to fight any infection which might easily affect a frail body.

Giloy gives best results when consumed in an empty stomach. Its dosage can vary according to its form – powdered or juice.

Note: Giloy works best when consumed for longer periods of about 4-6 months.

Giloy: How To Use?

Acharya Nityanandam Shree refers to Giloy as a tridoshnashak (one that balances all the doshas) and points to the important fact that only specific ways of consuming the wonderous herb will prove to be beneficial. Three major ways of consumption as suggested by him include:

Giloy is equally helpful in healing wounds as it is in maintaining good internal health. Following steps can be followed to make a DIY paste:

How To Make Giloy Juice At Home?

Though Giloy extracts available in the market do their job well, it is best to consume Giloy products; and they are quite easy to make too. Giloy juice can be used as a substitute to Giloy vati.  It can be used to cure dengue, for better skin, weight loss and basically all the benefits of Giloy can be experienced by just drinking this fresh juice daily. The steps include:

Giloy juice can be mixed with other ingredients like amla or neem extract for desired results.

Giloy: Side Effects and Precautions

Though Giloy is considered as a tridoshnashak and benefits the body internally as well as externally; it does come with a few side effects which must be kept in mind.

You can purchase a good quality guduchi powder from here 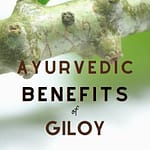