Yoga, as we all know, is the ancient practice of balancing physical and mental health and elevating the spiritual level, originally developed by sage Patanjali. As Yoga spread from the Indian subcontinent to other parts of the world, it was moulded according to the needs of the people. Ashtanga Yoga is one such modified version developed by K Pattabhi Jois. Jois claimed to have learned the style from his Guru Tirumalai Krishnamacharya. He even went on to establish the first Ashtanga Yoga Research Institute in Mysore in 1948. Hence the style is often called as the Mysore style of Yoga.

The name ‘Ashtanga’ which means eight-limbed is derived from the eightfold path mentioned in Patanjali’s Yoga Sutras. The eight limbs of Ashtanga include:

Ashtanga Yoga which involves a total of six series (three main series and four sub-series) involves a few key principles that define it:

K Pattabhi Jois regarded Tristhana, Vinyasa and The Six Poisons as the three major facets of Ashtanga Yoga. Asana, breathing and Drishti are included in Tristhana which means three places of attention. The six poisons are depicted in the Yoga Sutras as krodha (anger), kama (desire), lobha (greed), matsarya (envy), moha (delusion) and mada (sloth). The ultimate purpose of Ashtanga Yoga is to help a person purify their mind as well as the body by burning the six poisons by focusing on Tristhana and Vinyasa.

Ashtanga Practise Begins And Ends With A Prayer

Ashtanga practises always begins with a chant which signifies giving respect and honour to the Gurus who have passed upon us the knowledge of yoga. The opening prayer is as follows:

I salute the lotus-feet of my guru that have experienced the knowledge and bliss of Atman,

and that serve as a doctor for removing the delusion of people caused by the poison of samsara.

This chant, known to be Krishnamacharya’s favourite comes from a long poem, Yoga Taravalli written by Adi Shankara.

Ashtanga series ends with a closing prayer. The chant is derived from Rig Veda and is known as the Mangal Mantra. This mantra is chanted at the end of many ceremonies signifying a peaceful closure by asking the almighty for the well being of the whole world through our actions. The closing prayer is as follows:

Thus Ashtanga Yoga is not only for the upliftment of oneself, but to give up our selfish selves and divert our actions towards the well being of each and every living being.

Ashtanga Yoga has been developed as a series of pre-defined asanas and provides the flexibility to move from one level to another at your own pace. This means you are free to take your own time to master a particular series of Ashtanga yoga.

Often referred to as ‘Raja Yoga’ or the Royal Path, Ashtanga Yoga holds the key to vairagya or detachment. Regular practice can lead you to moksha or the most desired salvation.

Can I Practice Ashtanga Yoga?

One must remember that Ashtanga Yoga is not a beginner’s style but even the primary series demands a lot of effort and practice. Hence a person seeking to inculcate Yoga into his or her lifestyle is not recommended to begin with Ashtanga Yoga but to first practice different asanas and gain the flexibility of the body. The style that is equivalent to an intense cardio workout is also not recommended for people looking for a calm and soothing style.

The Ashtanga Yoga sequence begins not with the first or the primary series but with five round of Surya Namaskar (sun salutation) A and five rounds of Surya Namaskar B. Until a disciple becomes deft in the two types of sun salutations, the Guru does not progress further to the Ashtanga series. These sun salutations form a base for the upcoming Yoga practice. They differ from the common Surya namaskar practised in Hatha Yoga as it entails the special Ujjayi breathing.

It consists of a total of 9 asanas:

The sun salutation ends with samasthiti or the straight standing pose.

Beginning with Samasthiti, Surya Namaskar B consists of a total seventeen steps.

The cycle ends with samathiti.

The Surya Namaskars are proceeded by the basic standing poses. These include:

This is followed by sixteen asanas of the advanced standing poses sequence. These poses are performed in a harmonious manner.

The end of Surya namaskar A, B and the standing poses depicts the end of the practice session that precedes the real Ashtanga Series. Once a person gains expertise of the aforementioned asanas, they can proceed to the Ashtanga Series.

The Primary series which is the first series of Ashtanga Yoga is known as Yoga Chikitsa in Sanskrit. Translated as Yoga Therapy, it is named so because of its therapeutic effect on mind and body. The primary series forms the foundation of the intermediate and advanced series. It helps in building physical and mental strength through regular practice and introduces the concept of vinyasa.

The concluding sequence of the primary series is the harmonious performance of the sixteen advanced standing poses.

The second or the intermediate series of Ashtanga Yoga is known as Nadi Shodhana or the nerve purifier series. In this series, there is a raised focus on backward bending asanas. They strengthen the spinal cord which is a major part of the central nervous system. Including a set of forty asanas, the intermediate series provides a free flow of the prana. The asanas are performed in the following order:

The intermediate series has the same concluding sequence as that of the primary series.

It consists of 35 asanas done in proper sequence:

The Advanced B series of Ashtanga Yoga is also known as its fourth series. It consists of a total of 41 poses done in a proper harmonious manner:

The advanced series also ends with the same sequence as the concluding sequence of the primary series.

Although Ashtanga yoga practice heals the body from within and helps one walk on the path of spirituality; it is not recommended for everybody. Certain things must be kept in mind: 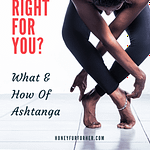