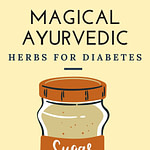 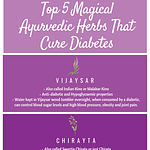 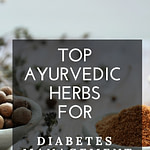 Diabetes is a lifestyle disease which is spreading faster in the world than any other health issue. According to WHO (World Health Organisation), “the number of people with diabetes has risen from 108 million in 1980 to 422 million in 2014”. Recent research also shows that 1 in every 11 people in the world has diabetes. It would be safe to assume that there will not be a single person who does not know a diabetic in their personal life, and some might know more as well. Let’s face it, all of us are tired of gulping pills after pills for back pains, neck pains, thyroid, PCOD, diabetes.. and the list goes on and on. Today in this post, I would like to discuss Top 5 Natural Ayurvedic Herbs that you can incorporate in your life and get that blood sugar level in control. Some herbs are known to even completely cure diabetes.

Vijaysar or Malabar Kino or Indian Kino Tree (scientific name: Pterocarpus marsupium) is a tree native to India, Nepal and Sri Lanka. Its bark is known as a ‘miracle cure for diabetes’ as it has anti-diabetic and hypoglycaemic properties.

The bark of Vijaysar tree is used to make tumblers and utensils. Water kept in these Vijaysar wood tumbler overnight, when consumed by a diabetic, can control blood sugar levels along with high blood pressure, obesity and joint pain. It reduces overall cholesterol, low-density lipoprotein and serum triglyceride levels in the body. It balances insulin levels. It is a kapha and pitta dosa pacifier. Vijaysar is also available in powdered form.

Apart from its anti-diabetic effects, it improves digestion, purifies the blood and also removes excess fat from the body.

Keep 1 glass of water in the Vijaysar wood tumbler overnight. In the morning, the colour of the water will change to brown. Drink it. After about a month, the water will stop changing colour. Now you can break the glass in pieces and soak 1 piece overnight. Drink the water next morning on empty stomach. Do this till all pieces are used. You will need another tumbler after all pieces are used. If you don’t want to break the glass, you can scratch the insides of the tumbler so it can be used again. Vijaysar tumblers are cheap and can be easily found online. Find it on Amazon here

There are no known side effects of Vijaysar. It is a safe herb to use and can be used long term.

Chiryata (scientific name: Swertia Chirata) as known as Chirata is a herb native to the northern Himalayan region of India and Bhutan. It is bitter and pungent in taste. According to ancient Ayurvedic text ‘Charak Samhita’, Chiryata has many medicinal properties. It is specifically known for its anti-diabetic properties. It keeps blood sugar under control by stimulating the pancreatic cells to secrete more insulin.

Soak 1 spoon of Chirata in 200ml of water overnight. Remove Chirata leaves from the water in the morning and drink the remaining water on an empty stomach. Do not take more than the recommended amount.

Chirayta Caution and Side Effects

Chirayta herb should only be used for age 10 and above. Also should be avoided during pregnancy. If you have intestinal ulcers, the use of Chirayta can make it worse so avoid. It is also not advisable to take it for very long periods.

Since it increases the production of insulin in the body, it is advised to monitor blood sugar carefully when taking Chiryata as it can cause hypoglycemia. It is generally known that Chiryata only shows an anti-diabetic effect when blood sugar is higher than normal range so there is less probability of hypoglycemia but it is recommended to not take it as medicine along with allopathic diabetes medication as it might cause blood sugar to go too low. It is always best to take the advice of a doctor before using this herb.

Saptarangi (scientific name: Salacia Oblonga) has been used in Ayurveda traditionally for its anti-diabetic properties. Saptarangi is native to India and Sri Lanka. It contains Glycosidase Inhibitors and Kotolanol which are known for controlling blood sugar levels in type 2 diabetics. Apart from having anti-diabetic properties, it is also being widely used now as a weight loss supplement. The bark of the root of Saptarangi is used for controlling sugar, serum cholesterol and serum triglycerides and it increases good cholesterol HDL. It also works in improving the liver and pancreas function and treats Diabetes in the long term.

Caution and Side Effects

If you are pregnant or nursing, don’t take Saptarangi. Also if you are going into surgery, it is advisable to stop usage at least 2 weeks before surgery as it may interfere with blood sugar control during and after surgery. It is also advisable to not consume if for long periods of time and consult a physician before taking this medicine.

Gudmar (scientific name: Gymnema Sylvestre) is also known as Madhunashini which means ‘sugar destroyer’ in Sanskrit. It is a herb found throughout India but is found abundantly in the central and southern parts of India. Gudmar leaf is used in Ayurveda, Homeopathy as well as Unani Medicine for the treatment of diabetes.

When used for a long period of time, Gurmar leaves reduce blood sugar levels by increasing insulin secretion. It has an extraordinary quality of suppressing the taste of sweet foods. This intern diminishes the sugar cravings and suppresses the appetite. Chewing on Gudmar leaves paralyses both sweet and bitter taste.

Apart from being anti-diabetic and sweet suppressant, it also helps reduce obesity and constipation. It reduces cholesterol levels and helps remove toxins from the liver. It has a slight purgative effect and also acts as a mild aphrodisiac.

If taken as a lone blood sugar lowering medicine, it has no side effects but combined with other medicines, it can have hypoglycaemic effects like lightheadedness, dizziness, nausea, and headache.

Guduchi (scientific name: Tinospora Cordifolia) is one of the most beneficial plants for type 2 diabetes. It is found in the tropical region of India, Sri Lanka and Myanmar. It is also known as ‘Amrita’ which means Elixir as it has many extremely beneficial properties. An interesting thing about this plant is that it is known to never die. If you plant an ages-old Guduchi stem, it will grow again. Apart from being anti-diabetic, it is also anti-piratic, anti-inflammatory and anti-allergic.

Guduchi fights with diabetes by increasing the production of insulin as well as burning excessive sugar in the blood. In recent years, it is also being used abundantly for treatment of Dengue fever as it is said to increase the platelet count in the blood. Enough evidence of the same has not been found.

Fresh Giloy juice can be prepared by blending the stem, leaves and some water. Consume it every day in the morning on empty stomach. Don’t consume anything for the next 30 minutes.

Another method is to smash a small piece of the stem in a mortar and boil it in a glass of water on low heat. Boil till the water remains half. Drink slowly after cooling down a bit. Don’t consume anything for the next 30 minutes.

It is not recommended to take giloy before and after surgery as it affects the control of blood sugar levels.

People with auto-immune diseases should also avoid this herb as it can overstimulate the immune system. Giloy works to improve the immunity which intern can aggravate the auto-immune condition.

Note: Please take the advice of a proper Ayurvedic practitioner before taking any medicine or herb. This article is only for reference purposes.

Did you find this post useful? Would you like to get back to it later? Save THIS PIN below to your Pinterest Natural Herbs or Health board!

Continue Reading
link to Saptarangi: The All Natural Herb For Reversing Type 2 Diabetes

[caption id="attachment_2220" align="aligncenter" width="800"] Saptarangi Flowers[/caption] Did you know that the World Health Organization estimates that around 422 million people world-over...