Milk has been considered the elixir of life for thousands of years. It is one that provides nourishment, health and long life. From the milk of the mother that a newborn depends on for life to the milk of the holy gau matas (mother cow) that provide not only for their young but for the world, this elixir has made its way into the texts that study life itself.

“Cow’s milk is Amrita. This has been stated by Indra, the king of gods. Therefore, if one donates a cow, he donates Amrita”. (*)

Ayurveda has deemed milk to be a rich, nourishing liquid with properties that can heal and allow an individual to achieve Ojas.

Cow’s milk is known to have the following Ayurvedic properties:

It is also known to provide relief from

Cow’s milk is known to pacify pitta in one’s body. It calms the digestive fire and significantly reduces acidity. It is also known to harmonize and calm the mind. However, one must take care that the right quality is taken at the right time and in combination with compatible foods only.

For those suffering from Pitta disorders, it is imperative that they avoid any sour dairy products. This could cause adverse reactions in the individual and further aggravate Pitta disorders. Ayurveda does not advise the consumption of milk along with food and hence, it must be consumed only after or before meals. The perfect time for consumption of milk is at night when the body is not put through physical stress.

Those that perform high intensity or stressful exercises must not consume milk in the morning as it can lead to acidity.

What is the best time to take milk?

To reap all benefits of milk consumption, it is recommended that milk must be consumed at night or in the late evening time. It is known to have great digestive properties and promote Ojas.

Ojas is referred to as a state of an individual that has achieved proper digestion. It is the most refined and subtle product of a perfectly functioning digestive system and is of extreme importance when it comes to maintaining one’s well-being and vitality.

In addition to its digestive properties, milk also acts as a sedative and promotes sleep. Given that milk has a high calcium content, the body tends to absorb more of it during low-activity periods. While there are numerous concerns regarding the consumption of food and beverages during night time, one can consume it late in the evening.

One of the primary concerns of milk consumption is its shelf-life and possible contamination. Most companies pasteurize milk not just to make it safe for consumption but to also give it longer shelf life. The methods sought out for this purpose are often cheap and quick and no afterthought is placed into the actual nutritional value of milk.

Many microbes that are good for the gut are killed in this process along with those that are bad for you, with no means to differentiate between them both. In addition to the loss of microbes, the milk bought off the shelves is rarely fresh and defeats the purpose of consuming it to avail nutritional benefits.

While commercialized pasteurization is negative in itself, homogenization is a far worse process. The fats are mixed well into the milk and when absorbed by the body, the fat globules are not digested well enough and due to the increase in the “Guru” or heavy properties, enter the bloodstream and lead to other disorders.

While pasteurization is necessary to rid the milk of unwanted microbes, homogenization is unnecessary. It is imperative that highly processed milk is avoided all together as the nutritional benefits can no longer be availed form it.

There are two ways to get maximum benefits from milk without having to drink it raw. One is by Vat-pasteurizing it and the other is by boiling it for a short amount of time. Vat-pasteurization is usually done in small batched where the milk is heated to 145 degrees Fahrenheit for a duration of 30 minutes and rapidly cooled. This is a favourable but expensive process among organic brands.

Milk And Salt In Ayurveda

Viruddha Ahar or the principle of conflicting foods is an important principle in Ayurveda. Ayurvedic practitioners often advise against the consumption of foods in certain combinations with the knowledge that they may have antagonizing properties towards each other. It is believed that consuming Viruddha Ahar would lead to ill effects in the short term, where the body immediately reacts to the consumption of such food or may lead to disorders or health issues in the long run.

One such example of the Viruddha Ahar combination is Milk and Salt. Milk has always been notorious for playing its part in Viruddha Ahar. While it is absolutely amazing and chock-full of benefits when consumed on its own, its interaction with different foods doesn’t lead to the same results. It is to be noted, that milk here doesn’t mean only cow’s milk, but all other types of milk as well.

Milk and fruit is also one such combination but what most people aren’t aware of is its combination with salt.

Ksheera lavanam or Milk and salt is a complete no-no in Ayurveda. It seems like an unlikely combination but is often overlooked. Milk-based broths, caramel milkshakes with sea salt, malt flavourings for milk, health supplements in milk, breakfast options such as processed cereal and milk are all bad food combinations due to their antagonistic properties and must be avoided to ensure that one does not suffer immediate ill effects or and health concerns in the future.

Apart from a few things that one must know while consuming milk, it is the simplest and the most extraordinary form of nutrition that one can include in the diet. It truly retains its place as the elixir of life itself. 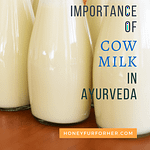