Everyone these days is always talking about the new ‘demon’ of the health industry and how its really not the best way to make your tea sweet, aka Sugar. In the ancient times, there was no Sugar, to begin with, but other or should I say ‘better’ plant-based alternatives which had their own medicinal importance as well, besides adding sweetness to our foods. Let’s explore these two in detail.

So what is the main difference between Sugar and Mishri (Rock Sugar)? Sugar is a compound prepared from sugarcane juice that goes through many chemical processes and cleaning to obtain an odourless and clear looking crystal form. Mishri, on the other hand, is a compound made also from sugarcane juice, but it is made from its ‘impure’ form. Mishri does not go through any chemical treatments which keeps the fibre content of sugarcane (aka impurities) intact, which has many health benefits of its own.

Ayurveda recommends to not use sugar as your daily sweetener and use Mishri or other natural alternatives. If you knew how both are made and the dangers of using sugar every day, you would say the same.

Lets’s look at both of these in Detail and How they are made.

What Is Sugar & How Is It Made?

Sugar does not need an introduction. It is the most addictive food ingredient known to mankind. Regular and overconsumption of sugar leads to a gradual increase in blood glucose levels, and increases the risk of obesity, heart diseases, hypertension, type 2 diabetes, acidity, early ageing and oral problems and chromium deficiency. Here is how its made:

What Is Mishri & How Is It Made?

Mishri or Rock sugar is also a form of sugar that is also extracted from the sugarcane plant.

While processing the juice, a brown coloured ‘impure’ form of sugar is produced which is also called ‘Khand’ or ‘raw sugar’. This sugar contains the natural fibre content of sugarcane which are also referred to as impurities.

How To Grind Mishri?

Grinding mishri is pretty simple, just use mortar and pestle to coarsely grind it or simply put it in a blender and it is ready to use.

Mishri is healthier than Sugar but diabetic patients should only consume mishri is moderation as it can alleviate blood glucose level, even though is a natural alternative for white sugar.

What is Tal Mishri?

It is a natural sugar crystal which is similar to normal mishri but it is made using the sap of the date palm. It is also called palm sugar.

In Ayurveda, Mishri is also known as Sita / Sharkara / Khanda Sharkara. There are many properties of mishri which make it an active ingredient in many of Ayurvedic most revered medicines and tonics eg Asavas and Arishthas.

It is alkaline in nature compared to sugar which is acidic. It helps maintain a normal pH in the body and pacifies Vata and Pitta. It also increases Kapha dosha when consumed in access.

It promotes digestion as it is very light and easy to digest. Due to its light nature, it also does not cause weight gain. It also helps control bad breath. In India, it is a tradition to consume fennel seeds (saunf) with Mishri post-meal due to such properties.

It is cooling and soothing in nature. It cools the body and it is generally added to medicines which are acidic/hot or difficult to digest. It is also used in cases of mild fever as it cools the body naturally.

Good For Cough And Cold

Since is pacifies Vata dosha, it is considered a good remedy for dry cough. Sucking on to a 5gm piece of Sharkara, relives the throat irritation and expels the sputum.

You can also consume it by making a mixture of Mishri with black pepper and ghee and taking it at bedtime.

Panchamrit, which is a mixture of curd, honey, ghee, milk and mishri, if taken at bedtime, is an amazing tonic for the female reproductive system. Panchamrit is also known for being a great skin, hair, and immunity tonic as it nourishes all sapta dhatus (7 bodily tissues) of the body.

Mishri is also a great supplement for lactating mothers as it increases the production of breast milk naturally.

It improves eyesight in both children and adults. One popular remedy is to make a mixture of white pepper (50gm), Almond (50gm), Fennel Seeds (50gm), and Mishri (150gm). You can consume 1/2 tsp of this mixture twice a day with warm milk for adults and children. You can also reduce the quantity and white pepper and increase the quantity of mishri for children.

Other than these benefits, mishri is also known to control vomiting, hiccups and bleeding disorders.  It is a mild laxative and also improves bodily strength and vigour.

If you are planning to make a switch from white sugar to mishri, you might want to make sure that you buy only the genuine mishri and not purchase the fake products available in the market these days.

To recognise the genuine product, keep in mind that the crystals are irregularity shaped and yellowish in colour and have a string inside them, due to which it is sometimes also known as dhaga mishri which means Mishri with a string. It should also not be too expensive.

Here are a few options I found on Amazon:

Did you find this post useful? Would you like to get back to it later? Save THIS PIN below to your Pinterest Natural Living or Health board! 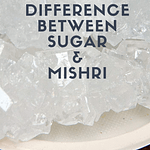