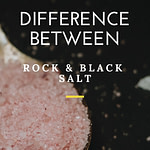 It is a given that salt, be it rock salt, sea salt or even black salt is an indispensable commodity in every kitchen and pantry. The famed and common flavour enhancer does not have many substitutes and if so, none that embody the taste that it does. While salt itself seems uninteresting and isn’t a novelty item for the good old cook in the kitchen, the types and uses that it has are many and learned by a few.

Rock salt is a pure form of salt found in crystal form which is pink in colour. It is naturally occurring and is not treated with any chemical what so ever in comparison to table salt. Black salt, on the other hand, is a kiln-fired derivative of rock salt. It is dark purple to blackish in colour and has greater health benefits when compared to any other type of salt.

World over, people buy different kinds of salts for their value for being uncommon. Most of us can easily agree that Himalayan salt or sea salt is deemed expensive when compared to “ good old-fashioned” table salt. Ayurveda itself has a use for the famed culinary aid, including it in medicines that can balance and pacify the Vata doshas. Salt is considered to be made of the fire and water elements and can be used to control moisture, promote proper assimilation and regulate blood pressure. It is also said that the first documented use of black salt was found in the Ayurvedic texts.

While the difference between the types of salt may not seem considerable, they are made of different chemical constituents and minerals that allow for a different taste and odour and health benefits. To understand them better, let’s take a detailed look at how different rock salt is from its counterpart, that is, black salt.

What Is Rock Salt?

Rock salt, also known as Halite and Sendha Namak is an unprocessed or minimally processed and pure form of salt sold in crystal form. In comparison with table salt, rock salt is naturally occurring and packed just so without the addition or interference of other chemical constituents. Rock salt has a good concentration of trace minerals and nutrients such as calcium, potassium, copper, iron, magnesium, chromium, manganese, zinc etc. Due to the presence of naturally occurring minerals, it can have a slight change in colour ranging from off-white to a pinkish hue.

Most supermarket aisles stock up on this compound, labelling it as Himalayan Salt and rightfully so. Rock salts are mined from various naturally occurring salt mines all over the world. The chemical composition of these salts changes based on the location and depth of the mines. The most common kind is called the Himalayan salt and can be found in numerous markets in Asia and around the world.

Sendha Namak or Rock salt is mentioned in numerous Ayurvedic texts. Charaka, the Ancient Ayurvedic healer and compiler of the Charaka Samhita advises regular consumption and inclusion of salt in one’s diet to regulate the doshas in one’s body.

Rock salt has a cold potency and helps balance the Pitta in the body. It also balances the Vata and is used to relieve the Kapha dosha. It is one of the few ingredients or compounds in Ayurveda that is known to have a positive effect on all three doshas.

Now that we know of Rock salt and its uses, let us take a look at Black salt.

What Is Black Salt?

Black salt, also known as Kala Namak, is a derivative of Rock salt, only kiln-fired. While the making of Kala Namak primarily involves the mined salt from the Himalayan Salt mines, it can also be made using salt from the salt lakes of Sambhar or Didwana in North India. While the large crystals look black or dark violet/purplish or reddish in colour, grinding them into a fine powder would give a pink yield. Kala Namak’s characteristic pungent smell, one similar to Hydrogen sulphide is enough to distinguish it from rock salt.

Traditionally, the carefully sourced rock salts are placed in a ceramic jar or a crucible along with small quantities of Harad/Haritaki seeds (Terminalia Chebula), Amla (Gooseberry), Bahera (Terminalia bellirica), babul bark(Acacia arabica) and some charcoal. The ceramic jar or crucible is then sealed shut and fired in a furnace or a kiln for 24 hours. The firing melts the salts and allows for the chemical reaction to occur. The salt is then removed, cooled and aged before packing.

Black salt is an acquired taste for most people due to its distinctive smell and a sharp sulfurous flavour. Pink in its powdered state, black salt is widely used in the preparation of snacks or chaats throughout India. Ayurveda states that unlike rock salt, black salt can increase Pitta dosha and Kapha dosha while pacifying Vata dosha. It can be found as an active ingredient in Ayurvedic medicines such as Chandraprabha Vati, Chitrakadi Vati, Agnitundi Vati and Pradarantak Lauh.

Irrespective of their health benefits and mineral and nutrient contents, one must remember that both Rock salt and Black salt are primarily composed of Sodium chloride, a compound found in common salt. The nutrients or minerals found in the salts must not be considered as supplements or substitutes for mineral/vitamin deficiency and must be used as per dietary values only.

For those suffering from high blood pressure or hypertension, it is advised that salt be consumed in minimal quantities only. The dietary intake must not exceed 6 grams a day in case of healthy individuals.

Rock salt and Black salt do not contain added minerals and are not fortified with Iodine in their natural forms. Table salt or fortified food must be consumed to help the body assimilate and meet the required quantities of Iodine.

Black salt can be used in spicing up and expanding the flavour profile of snacks and chaats. It can also be used to elevate the taste in day-to-day meals. It is also being used in vegan cuisine to improve flavour and give an “eggy” taste.

Himalayan rock salt has been used in numerous creative ways. It has been used in the form of a slab to cook and serve meals. It is used as a final garnish or as a last step flavouring agent in many restaurants.

Abhyanga in Ayurveda means oil massage. It is suggested as both as a preventive modality in everyday life of a person as well as for treatment of diseases. Depending on the constitution of a person,...

Ancient indian texts are full of beautiful yoga and meditation related quotes. Below are a few that I loved. These are just not from ancient texts but some are also recited by great yogis and...