Datura is a herb that grows mostly throughout the year. Native to the temperate and tropical regions of the Earth, Datura has not one but lots of species. All the species, however, are extremely poisonous in nature. Datura seeds and flowers are much more poisonous as compared to the leaves. “Witch’s weed” is what Datura is often called. It may even exhibit properties like deadly nightshade.

Quite contrary to its regular description, Datura finds its use as a medicine in Ayurveda. Many rituals make use of Datura as well. The poisonous nature of this plant isn’t hidden, still, Datura has been put to use since ancient times. While Ayurveda physicians have been using it as medicine, sages and holy men have been putting it to spiritual use.

Datura has a chemical composition of many different natural chemicals. Some major components are –

Thus, being a composition of such varied chemical elements, Datura has numerous medicinal properties. Datura can be used as –

As stated before, Jimson Weed is essentially very poisonous. An untrained hand must never meddle with it. Still, it has been used in the past by people throughout the globe through the course of history.

Many uses of Datura can be observed in various civilizations that walked the Earth. Some age-old uses of the plant can be seen as follows

Datura was used by the Zunis as an analgesic for bone setting. The Chinese used it as anaesthesia for surgery.

As A Flying Ointment

The flying ointment is easily one of the most famous, yet controversial, applications of the herb. It was supposedly used by witches of Medieval Europe in order to fly. The drug had a complicated composition, made from extracts of plants like hemlock, henbane, wolfsbane and some known plants from the Nightshade family. Once applied on the soles of feet and armpits, legends say it granted the witches the ability to fly. Interesting, right?

Shamans used it to brew Ayahuasca. Just 2-3 leaves were enough to make a brew for 30-40 people.

British soldiers of the past used it to treat respiratory problems. The chemicals – scopolamine and atropine are good sedatives. It is also used to cure nausea, dizziness, and motion sickness.

A blend of cannabis and datura is safe and burns easily. Thus, it is used for smoking purposes.

Having talked about this herb’s ancient/legendary uses, let us shift to the modern world. With the advancement of biological science, scientists and researchers have been able to list out the chemicals found in the plant. This has helped in sketching out the safe uses. Below mentioned are some of the many areas where it finds detailed application in:-

White Datura root works magic in the treatment of schizophrenia. Shri Chakrapanidatta’s greatest work – Chakradatta Samhita talks in detail about the preparation of a cure for schizophrenia in chapter Unmanda.

Following are the ingredients and their prescribed quantity-

While science in the 21st century still struggles with a cure for diabetes and the best you can do is take insulin injections, Ancient India had a cure for the same.

When the mixture is served with Saunf ark or Fennel Distillate to the patient of diabetes mellitus, it curbs down the effects of the disease to a very great extent.

Ayurveda talks about various different methods to cure Epilepsy. A large fraction of these cures makes use of this plant.

When the mixture is served with butter, it acts as a cure to epilepsy.

Just like the previous preparation, the ingredients are mixed in equal quantity. When one gets an epilepsy attack, the mixture is instilled in the nose to achieve immediate results.

It is miraculous in the treatment of ear infection.

This cure is given by Chakradatta, a renowned scholar of Ayurveda. It has both antiseptic and antibiotic properties. When this oil is instilled in the infected ear, it relieves the patient and cures the disease.

This itself speaks of the versatility of the herb. Datura is employed in the treatment of dog bites. Its root can treat the visible effects of a dog bite in no time, as given in the Sushruta Samhita, from one of the first surgeons of the world – Sushruta.

The above-mentioned ingredients are mixed properly. The mixture is then given to the patient with chilled water twice a day. This acts as a cure to a dog bite.

Bhavamisra, the renowned writer who wrote Bhavaprakasha, describes many cures for many diseases. He has also highlighted the importance and use of the herb in curing intestinal worms.

The preparation is simple. The patient is given about 5 to 6 drops of datura leaf juice along with buttermilk. It helps to cure intestinal worms.

Harita Samhita is a classic of the world of Ayurveda. It has provided a simple and easy cure for viral conjunctivitis that uses the root of this plant.

The root is crushed and mixed with water. The liquid is then strained. That’s all that goes in the preparation. Thus obtained ‘Datura water’ is instilled in the eyes of the patient of viral conjunctivitis. Immediate results can be observed with this remedy.

Ayurveda has a cure for nightfall in men.

The three ingredients are mixed in an equal ratio. The mixture is then made into tablets. The tablets are taken with Triphala water to cure the disease.

Caution: First of all, it is very necessary to understand that this is an extremely poisonous herb. The plant’s toxic nature is the major reason why people tend to stay at bay. Thus, if the herb is taken at all, it should always be taken after consultation and strict prescription of a skilled physician.

It should also be understood that Datura has a number of side effects. A slight tip-off in the quantity or the procedure used and it might turn deadly. Following are the side-effects:-

It is indeed a wonder on Earth. There aren’t many naturally-occurring plants on the planet that are as versatile. The ancient civilizations used to employ Datura – be it for pleasure or the treatment of various different diseases. Yet, as mentioned before, one needs to be extremely careful when using Datura. When prepared neatly and taken likewise, it does wonders. On the other hand, a little mistake may lead to several complications – even death. Therefore, it should be taken with special care and upon the prescription of a skilled practitioner. 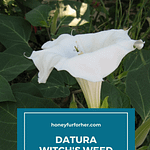