Brahmi is quite prominent Ayurvedic herb, mostly famous for its ability to work as a tonic for the brain. Ayurveda classifies the herb as a Medha Rasayana which means herb that provides longevity and improves memory and intelligence.

The herb is known by different names. It is known as Brahmi in Hindi, Water Hyssop in English and its botanical name is Bacopa monnieri. It finds mention in a number of ancient Ayurvedic texts like Atharva Veda, Charaka Samhita and Sushruta Samhita.

Brahmi Anatomy And Distribution: How To Identify Brahmi Plant?

Brahmi is a perennial creeping herb with succulent leaves. It is soft and non-aromatic and can grow up to 6 inches in height. The bitter edible plant has alternately placed leaves and white to purple flowers. The herb is sometimes also called water aquarium plant since it can grow in water.

Brahmi is mostly found growing in wet and marshy areas throughout the world. You can check out the video below to know what it looks like.

Brahmi’s most important use is medicinal but it is also grown as an ornamental plant, especially in aquariums.

Brahmi is useful in the treatment of

Medicinal properties of Brahmi include:

According to Ayurveda, Brahmi’s health benefits include:

Ayurvedic Properties or Gunadharma of Brahmi or Bacopa Monnieri

Is Rich In antioxidants

Antioxidants are those substances which protect the cells of the body against the risk of cell damage posed by free radicals. Free radicals build oxidative stress in the body and can hamper the functioning of normal cells. They can often lead to the formation of tumours which are responsible for developing chronic conditions like heart disorders and various types of cancers.

Brahmi is one of the best available tonics out there which help in improving cognition and functioning of the brain. It is often given to children as well as adults in combination with other herbs like Ashwagandha to improve memory and concentration. From a long time, it has been used as Ayurvedic medicine to improve focus.

One of the studies conducted on mice concluded that Brahmi helped in improving spatial learning and memory. It even increased the dendritic length as well as branching. This, in turn, has an effect on the speed with which information transmission takes place in the brain.

According to another study which was conducted on adults, Bacopa helped in enhancing the learning rate, retention of information and the speed with which visual information is processed. Consuming Brahmi can help save one from cognitive disorders like Alzheimer’s disease and dementia. This is because of the presence of the compounds called bio-chemical bacosides. These compounds can help reverse damage caused by amyloid compounds in the neural pathways that transmit information. They lower the oxidative stress in the brain and help create new neural pathways. This ensures a sharp and young brain even at old age.

Beneficial For The Overall Health Of The Nervous System

Apart from being a brain tonic, Brahmi works as a tonic for the whole nervous system. It enhances and tones the majja dhatu or the nervous tissue. This is because of the presence of Bacposide A and B chemical compounds in Brahmi which improve neurotransmission and prevent neurodegeneration. Thus Brahmi is beneficial in treating a number of neural disorders.

Brahmi is well known for its ability to enhance immunity. It works as a health rejuvenator and creates an immune system that is capable to fight diseases like jaundice, tuberculosis and other chronic fevers. Supplemented by its antioxidant properties, it helps in increasing the response time of the immune system against any kind of pathogens.

Consuming the herb can free you from the numerous visits to the doctor by creating a healthier and stronger version of your body.

Brahmi has anti-inflammatory and analgesic properties. This makes it quite beneficial in providing relief from swellings and pains. It is especially useful in joint-related problems. It also has anti-arthritic properties and applying Brahmi oil on the affected area can relieve the swelling and pain.

Thus it provides relief from a number of inflammatory conditions including gastric ulcers. According to a few test-tube studies, Brahmi helps in suppressing the release of cytokines. Cytokines are those molecules which stimulate the inflammatory response of the immune system. It even inhibits the enzymes which cause inflammation – caspases, cyclooxygenases and lipoxygenases. In fact, Bacopa is a much better anti-inflammatory herb even as compared to one of the best anti-inflammatory medicines like diclofenac and indomethacin.

Bacopa acts as an antimicrobial and helps in faster healing of wounds. Filled with antioxidants, it acts as a rejuvenating herb and makes the skin appear healthier, smooth and young-looking.

High blood pressure has become a common problem among all, be it children or adults due to consumption of unhealthy food which usually contains a high amount of sodium. Though a seemingly harmless issue which can be resolved by a change in diet, it can adversely affect the normal functioning of the heart. It weakens the heart muscles and increases one’s susceptibility to other heart disorders.

Bacopa can work out to be an effective remedy against high blood pressure. According to one of the studies, it can help reduce both systolic as well as diastolic blood pressure. This quality of the herb is because of the presence of nitric oxide which helps in dilating the blood vessels.

Brahmi oil is applied to the head because of its cooling and calming effect on the nerves. But with improved blood flow, it is also beneficial in improving the quality of hair. It helps in getting rid of split ends and dry and rough hair. Brahmi oil is also used in the treatment of dandruff, hair loss and itchy scalp.

Apart from being efficient in reducing blood pressure, Bacopa also helps in lowering the level of sugar in the blood. Thus it is quite beneficial for people suffering from diabetes.

Benefits For The Respiratory System

Consuming this herb in any form can help elevate the health of one’s respiratory system. According to Ayurveda, Bacopa is helpful in treating respiratory system disorders like chest congestion, blocked sinuses and bronchitis.

The anti-inflammatory properties of Brahmi help in relieving the inflammation of respiratory tracts and the throat and prevent the accumulation of mucus. Since the herb has a Bronchodilator effect, it is used in the treatment of Asthma.

A study by The Department Of Clinical Pharmacology, Mumbai, Maharasthra, shows that the herbal Ayurvedic formulation Brahmi ghrita that contains Brahmi as the main ingredient is very effective in dealing with Attention Deficit Hyperactivity Disorder (AHDH) in kids.

How To Use Brahmi Plant / How To Take Brahmi?:- Dosage Information

Brahmi can be used externally as well as internally in the following ways:

People who experience sleepiness must consume the herb at night.

Brahmi: Side Effects And Precautions

As a herb, it is considered possibly safe. However, there can be some side effects and certain precaution should always be maintained: 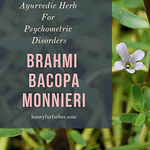 One thought on “Brahmi: A Brain Boosting Ayurvedic Miracle: Uses, Benefits & Side Effects”